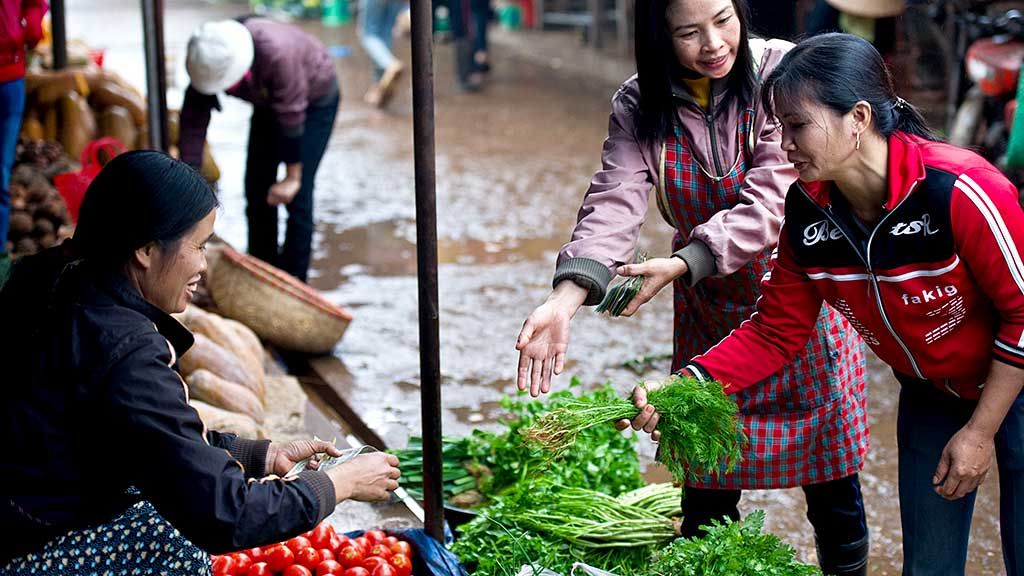 HAI DUONG PROVINCE, VIET NAM – In 60 years working the land, Phung Minh has been at the mercy of the rains. They have nourished his crops but they have also destroyed them. Viet Nam’s current drought, the worst in decades, has wreaked havoc on farms. But when the skies open, the damage can also be severe.

“The water stays in the field for weeks,” says Phung. “I’ve lost so many crops that way over the years.”

But recent storms which brought floods that previously would have destroyed his harvest did no damage; the water was quickly drained away by a new pump station near his farm in Hai Duong province, in Viet Nam’s Red River Delta. The pumps have removed one of the challenges faced by Vietnamese farmers like Minh, but others remain as weather patterns become increasingly unpredictable.

In the nearby Nghi Son area, Nguyen Thi Tuan, 52, looks forward to the day that a new pump station will help her manage confusing new weather threats to her livelihood. Her groundnut, ginger, and corn crops usually thrive mid-year. Now they are at the mercy of erratic weather. “This year there’s been no water, but in past years there have been floods at this time of year. We don’t understand why.”

The pump stations are two of 10 being built or rehabilitated in three northern Vietnamese provinces under the Strengthening Water Management and Irrigation Systems Rehabilitation Project. The project, supported by a $100 million loan from the Asian Development Bank (ADB), is part of Viet Nam’s effort to manage rising agricultural and industrial demand for scarce water resources. In addition to pumps and other infrastructure investments, the government is enacting new water-related laws and policies, and educating a new generation of water management experts.

The country’s geography puts it at a disadvantage; a long, flat coastline exposes it to flooding and salt-water intrusion, especially in the fertile river deltas. As the current severe water shortages show, there’s a high risk of drought as well. Viet Nam’s plains rise quickly to highlands, which are susceptible to erosion and leave little space for catchment areas to store water.

Moreover, climate patterns have been disturbed by a warming planet and the onset of El Niño—a periodic weather event characterized by higher ocean temperatures that is worsened by climate change, and which caused recent heatwaves.

Viet Nam has been hit particularly hard by El Niño. Reservoir levels dropped by two-thirds in 2015, with river water in the Central Regions 20% to 40% lower than average at the end of the rainy season. River flows were down 40% in the Mekong Delta, allowing saltwater intrusion to occur earlier than usual and much further upstream to areas untouched by salinity for nearly a century.

“Usually the Mekong Delta floods every year at the end of October, but last year there were no floods,” says Ho Le Phong, a specialist in natural resources and agriculture at the ADB’s Viet Nam Resident Mission. “Now there’s a very severe drought going into its fourth year.”

Changing weather patterns damaged 60,000 hectares of crops in Central and Central Highland regions in 2015, according to the Ministry of Agriculture and Rural Development, while 104,000 hectares of 2015-2016 winter-spring crops were severely impacted in the Mekong Delta. Recently, the Asian Development Bank approved $3 million in grant assistance from its Asia Pacific Disaster Response Fund to support relief efforts in the wake of the drought and salt water intrusion in the South Central, Central Highlands and Mekong Delta regions.

Viet Nam is acutely exposed to climate change, which is projected to disrupt rainfall patterns—shrinking river flows—and induce greater evaporation from paddy fields. This affects the agriculture, industry, and energy sectors, all of which rely on increasingly scarce water stocks. By 2020, water use is expected to reach 120 billion cubic meters, up from 80 billion cubic meters in 2008.

Already local officials say the changes to water availability have compelled some farmers to shift from planting rice to other crops that can be grown faster than the usual cropping period of between 4 and 6 months. In Hai Duong Province, for example, some farmers are moving into higher value crops such as lychee and corn which are less water intensive.

Another strong focus the of government’s response is to improve water use efficiency in drought-affected provinces through innovative water-saving irrigation technologies and maintenance of existing infrastructure.

“Irrigation infrastructure has to be designed to a high standard, particularly in the face of increased natural disasters, to get the best return on investment,” says Sanath Ranawana, a natural resources management specialist at ADB. “These systems should be designed and built stronger and better to withstand extreme climate conditions.”

Farmers are also being helped by the government’s new Water Law, which was enacted in 2014 and for the first time recognizes the economic value of water. As Viet Nam improves its water management to more accurately reflect that value, it will need many more water specialists to implement new, more efficient systems.

But there aren’t enough trained people to do that work. At the only institution in Viet Nam dedicated solely to training water specialists, Ha Noi’s Water Resources University, 12,000 students squeeze into a space meant for 6,000. “The demand is huge,” says Tran Viet On, vice rector of the university.

Tran is also director of an ADB-supported program to build a second water resources campus—part of the project that is also financing the construction of the 10 pumping stations.

This year half the students at Ha Noi will be transferred to the new campus, now nearing completion at a sprawling site in Hung Yen Province, adjoining Ha Noi. Eventually, 13,400 students will be able to study a wide range of courses including mechanical engineering, urban planning, and new disciplines such as disaster risk management.

“There will be many new subjects,” says Mr. Tran. “This will be a training center for science and technology in the water sector.”

The expertise these graduates will bring to bear on Viet Nam’s water challenges may take a few years to make a difference. But already the tide is turning in favor of farmers like Phung Min and Nguyen Thi Tuan, as they enjoy the break from fickle weather provided by the new pump stations.

“This helps us a lot during droughts and floods,” says Nguyen. “Life will be better than before.”

Climate Change and Rural Communities in the Greater Mekong Subregion: A Framework for Assessing Vulnerability and Adaptation Options

Environment in the Greater Mekong Subregion