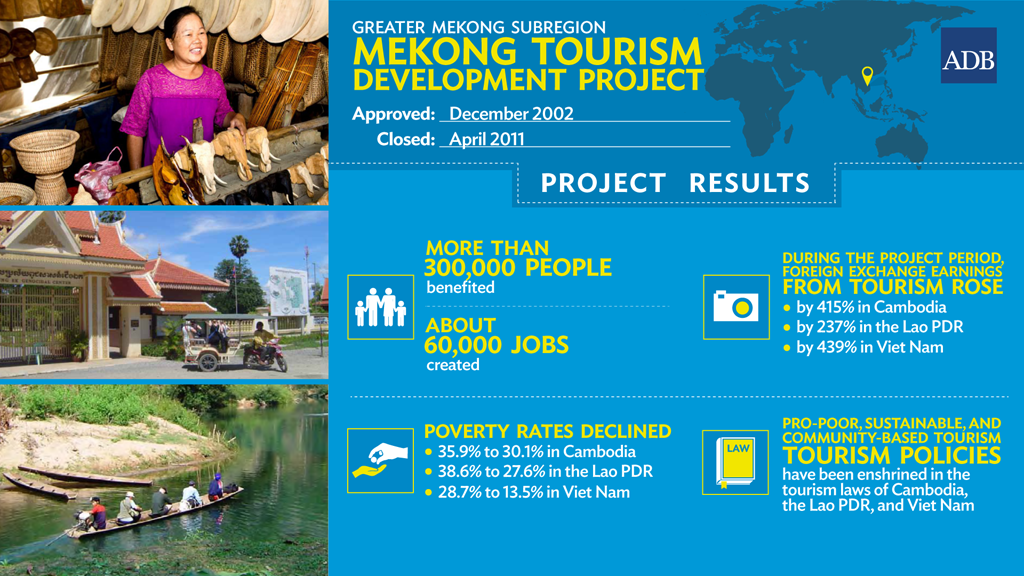 Several years ago, Laotian widow Som Chit moved with her four young daughters from the southern part of the Lao People’s Democratic Republic (Lao PDR) back to her birthplace of Ban Vieng Neua. She eked out a living, and the family barely survived on the rice she harvested.

Then, however, funds from ADB’s Greater Mekong Subregion (GMS) Mekong Tourism Development Project, which designated Ban Vieng Neua as a “culture village,” paid Som Chit to work as a cleaner in a guesthouse. Later the project trained her in handbag design. With her confidence growing, she developed skills as a weaver.

These skills and her designs for traditional Lao women’s skirts – sins - raised her annual income by $340. Sales of the skirts enabled her to feed her family and send her daughters to school. “The greatest reward for me,” says Som Chit, “is the respect I get from fellow villagers and my daughters because I’ve been able to support them.”

Investing in infrastructure to support tourism

Som Chit is one of millions who have directly and indirectly benefited from the project that ADB began implementing in 2003 in Cambodia, the Lao PDR, and Viet Nam. It was completed in 2011.

The three nations shared the $35 million in project funding. ADB allocated $15.6 million for Cambodia, $10.9 million for the Lao PDR, and $8.5 million for Viet Nam for the project, which exemplifies ADB’s promotion of regional cooperation and integration across Asia and the Pacific. As with all other ADB operations, the aim was to reduce poverty and boost economic growth in ways that are respectful of the environment and culture. The results have been felt across the region in a wide variety of ways. Intrepid tourists trekking through the mountains of the Lao PDR can now stay in local homes or community-built lodges, for example, or buy the colorful skirts and blouses woven by Som Chit and others.

If they were to attract more tourists, the three Mekong River countries needed to improve their infrastructure. So in the Lao PDR, the project constructed a new terminal, control tower, and 1,600-meter runway to allow larger planes and more passengers to use Luang Namtha Airport. It also upgraded the 26-kilometer access road to Kwangsi Falls, a tourist destination. This reduced travel time from nearby Luang Prabang by more than one-half.

In Siem Reap in Cambodia, funding enabled the city to replace its antiquated water system with new sewers, drainage canals, and storm-water chambers. This not only helped reduce the risk of waterborne diseases, it made the city more welcoming for thousands of tourists who visit the world-famous Angkor Wat temple complex.

In Viet Nam, the project’s My Tho Tourist River Pier Development built a landscaped public park at Tien Giang, reinforced the river embankment with floating steel wharves, and added a passenger terminal.

These interventions have had a major impact on the tourism industry. Foreign arrivals in the GMS countries increased to over 30 million in 2010 from less than 17 million in 2002. Tourism is believed to have generated $22 billion in economic output in that year and provided employment and crucial income for 4.2 million. By 2015, the number of visitors from abroad is expected to top 50 million and help sustain 7.3 million jobs in the GMS.

Remittances sent back to rural communities from tourism areas where family members have found work have grown. A 2010 ADB study found that more than 75% of men and women working in Siem Reap and Phnom Penh hotels remit wages of more than $1.2 million per month to people at home.

Because the industry is labor-intensive and most business participants are small operators, the effects of vibrant tourism are felt quickly, and the benefits permeate all aspects of life.

Consider the people of Thapaen Village, home of the Khmu ethnic group. Before the road to the nearby Kwangsi Falls was upgraded, 52-year-old Bouaphan Chanthavady survived on subsistence farming. Bouaphan gave birth to eight children unattended at home, and lost four of them.

But when the new road opened, she began selling noodle soup and fruit at the entrance to the waterfall site. She has raised her income by $150 a month, which financed the purchase of the concrete blocks and tiles with which her husband built their new house. She can also pay $1 per month for health insurance for the family.

“Our life has improved,” says Bouaphan, “and the future looks bright.”