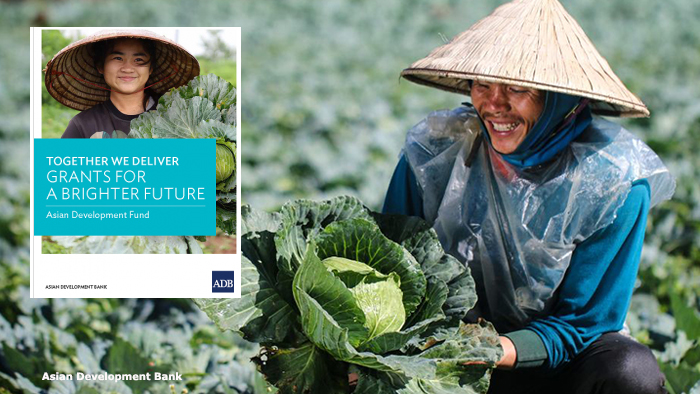 Together We Deliver: Grants for a Brighter Future is a special edition of the Asian Development Bank’s (ADB) annual publication featuring stories of lives uplifted across Asia and the Pacific through grant financing by the Asian Development Fund (ADF). The ADF provides grants to support activities that reduce poverty and improve the quality of life in “ADF countries”—the poorest and most vulnerable countries in the region. Quantifiably, these countries had large gaps in performance against the Millennium Development Goals and may struggle to achieve the Sustainable Development Goals.

In the Don Khone Island of the Lao People’s Democratic Republic’s (PDR) Four Thousand Islands, the homestay business of Sengaloun Khamphan and Thepmai Thongsaly grew from a single bungalow for guests and a small restaurant in 2002 to 30 cottages, spurred in part by the Greater Mekong Subregion (GMS) Tourism Infrastructure for Inclusive Growth Project’s efforts to increase connectivity. The project upgraded roads, ferry landing, and other facilities, as well as strengthened the urban environmental infrastructure and tourism destination management capacity of the community. This is just the beginning: phase II of the GMS project envisions further upgrades to roads and river ports around the islands, and improvements including cycle track and public lighting.

In Luang Prabang, Lao PDR, Phouangmala Keophet’s restaurant struggled to stay afloat in the early 2000s. Despite its location in a world heritage site and sufficient number of kitchen staff, food storage and freshness issues resulted in bad reviews. However, Phouangmala did not give up. Instead, she decided to take the opportunity to train her kitchen and other restaurant staff in food handling made available under the ADF grant-assisted Improved Sanitary and Phytosanitary Handling in the GMS Trade Project. This proved life changing: it not only taught her managers and staff members how to store and handle food hygienically, it led to more efficient stocking and almost total elimination of the 50% spoilage rate that had previously been eating away at the bottom line.

With the increase of travel, trade, and traffic across the GMS region comes a higher risk of exposure to communicable disease, including elevated threats of HIV/AIDS to people in the frontier regions and along GMS transport corridors. Compared to its neighbors, the Lao PDR had a lower prevalence of HIV/AIDS in its adult population. ADB’s $5 million ADF-financed GMS Capacity Building for HIV/AIDS Prevention Project aimed to work from this baseline: reviewing the Lao PDR’s national HIV strategy, policies, and legislation to develop and update national guidelines and standard procedures for HIV prevention; helping the governments of the Lao PDR and Viet Nam do better in reaching and helping high risk and vulnerable people in the border region GMS economic corridors; and initiatives such as improvement of patient services and voluntary counseling and treatment provided by target district health facilities. When the project ended in 2018, survey results have shown reduction in risky behaviors of target groups and prevailing low rates (0.3% among its adult population) of HIV/AIDS in Lao PDR.