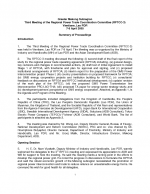 The Third Meeting of the Regional Power Trade Coordination Committee (RPTCC-3) was held in Vientiane, Lao PDR on 7-8 April. The meeting was co-organized by the Ministry of Industry and Handicrafts (MIH) of Lao PDR and the Asian Development Bank (ADB).

The RPTCC-3 meeting discussed the following: