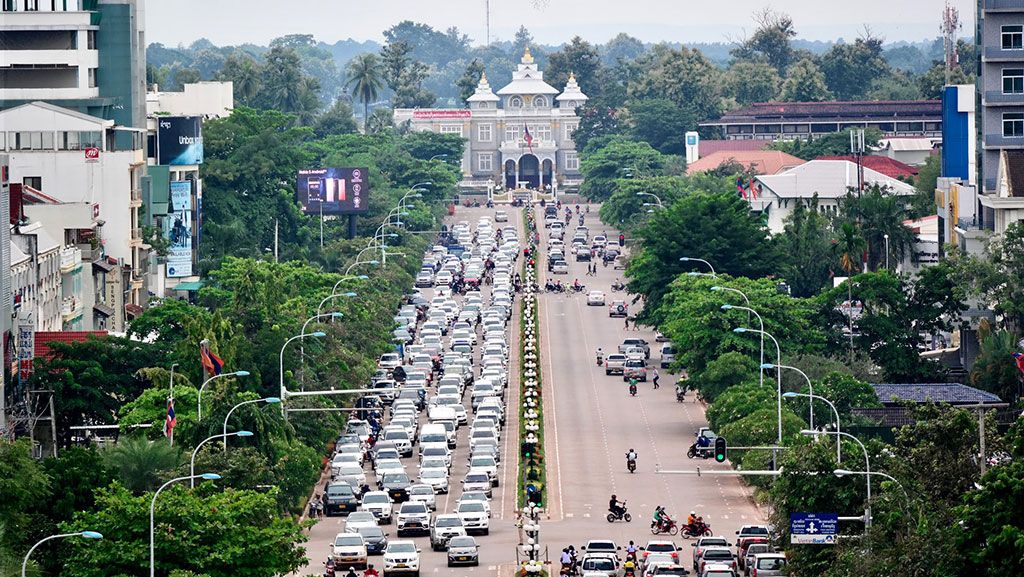 Vientiane, the capital of the Lao People’s Democratic Republic, has a growing population living and working within a hub of government, tourism, educational, religious, commercial institutions, and residential areas. Its narrow, convoluted streets are overflowing with vehicles.

The total number of private vehicles registered in Vientiane increased at an average annual growth rate of 17% during 2000–2009 and at a growth rate of more than 10% since then. Congestion is swelling, pollution is building up, and road accidents are on the rise. Traditionally, Vientiane’s public transport has not been commuter friendly, largely comprising tuk-tuks or tricycles. As a result, there is a high dependence on private vehicles. In 2011, motorcycles accounted for 67% of daily trips compared to an estimated 0.6% for public transport.

To encourage a shift from private vehicles to public transport, the city’s bus service, the Vientiane Capital State Bus Enterprise (VCSBE), has been improving its services from the central bus station to other points in Vientiane, with technical and financial support from the Japan International Cooperation Agency. To help transform Vientiane into a sustainable city, the Lao PDR government is introducing a bus rapid transit (BRT) system linked to the VCSBE bus networks and other transport modes.

“Transport is the lifeblood of urban development,” says Senior Transport Specialist for Southeast Asia Daisuke Mizusawa. “A sustainable urban transport system can propel a city toward progress while ensuring the safety and mobility of its inhabitants.”

Through the Vientiane Sustainable Urban Transport Project (VSUTP), the Lao PDR government has found supportive allies that share the same goals—steering Vientiane away from its current unsustainable path. ADB, the European Union’s Asia Investment Facility, European Investment Bank, Global Environment Facility, and the OPEC Fund for International Development, are cofinancing the project. They envision that this initiative will ease congestion in the city and contribute to a significant decrease in carbon emissions.

The centerpiece of the project is a modern BRT system. Three BRT routes with a length of 149 kilometers (km) (ITECC Mall–Non Teng, Tha Ngon–Thongpong, and National University of Laos–Fa Ngum Statue Park) will be integrated into the VCSBE network. Their combined network will total 304.4 km. A BRT corridor between the National University of Laos and Fa Ngum, consisting of 12.9-kilometer dedicated bus lanes with 28 enclosed stations, will be developed to transform the city center. The BRT system, once completed, will feature 50 new battery-electric buses.

The BRT system will include a sustainable and safe traffic management system to ensure that the benefits of the BRT are maximized, especially for pedestrians. Road safety concerns will be alleviated when traffic lights and signals at pedestrian crossings, pavements, and universal accessibility features are in place. To ensure smooth traffic flow and entice people to take public transport, the project will also install a parking management system, which includes on-street paid parking in the city center area using electronic meters. A vehicle registration system was already established to help enforce parking regulations while the parking management system will provide 2,100 on-street parking spaces for cars and 1,800 spaces for motorcycles.

Accessibility for pedestrians and non-motorized transport

The project will also improve pedestrian facilities near BRT station areas by installing signalized pedestrian crossings, street lighting, pavement upgrades, and universal accessibility measures. In addition, it will introduce nonmotorized transit by providing electric pedal vehicles (e-pedicab) which aims to improve the quality of transport service and promote green energy in the city center of Vientiane.

The project is helping the government set up an Urban Transport Management Section (UTMS) that will oversee BRT operations and facilities and other sustainable transport operations in the future. An attached technical assistance financed by the High-Level Technology Fund has been providing staff to be assigned to the UTMS with capacity development programs.,/p>

Aside from the BRT, the Vientiane Sustainable Urban Transport Project will also provide e-pedicabs to promote the use of green energy in the city.

The BRT will help transform the city, turning it from a congested hub into an environment and pedestrian-friendly center. At project completion, projections indicate that the use of public transport will increase, from its share of 0.6% in 2013 to 6% by 2025. When the BRT is fully operational, it will serve 48,000 riders a day, compared to just 4,000 in 2013. Moreover, it will help cut down the city’s greenhouse gas emissions by 25,000 metric tons per year from 2020 onwards.

Project completion is estimated to be in 2024.

“When work is done, Vientiane will move a step further toward becoming a sustainable urban hub, with a BRT system decked with advanced technology and innovative practices,” says Mr. Mizusawa. “This new infrastructure will help ensure the accessibility, safety, and mobility of the city’s growing population.”

The BRT will transform Vientiane from a congested hub into an environment and pedestrian-friendly center.