These research outputs represent the successful culmination of the PPP's pilot initiative to expand its outreach to research institutions as part of its capacity development mandate. The past 7 years of the PPP have focused on the delivery of learning programs, consistent with the program's vision of building a core of highly capable civil servants who would play a key role in shaping policy choices. But as GMS countries continued to face increasingly complex economic development challenges, the knowledge base required to inform policy choices has become increasingly important. Learning courses provided the tools but not the empirical basis for designing policy. Moreover, the differential impacts of policies among various groups needed to be better understood to assess the appropriate tradeoffs. This policy-knowledge gap is more apparent in the less developed GMS countries where research institutions have limited capacities and resources to conduct policy-based research. Recognizing this, and in an effort to bring its capacity-building goal onto a higher plane, the PPP Research Program was launched in March 2009 to help promote a more effective link between knowledge generation and policy formulation.
The four articles in this volume investigate in-depth four issues that have emerged in the GMS border areas as a result of increased connectivity and economic interaction in the subregion. These issues deal with (i) the implications of contract farming arrangements on the benefits received by the farmers, (ii) the design of incentive policies for cross-border economic zones, (iii) the impact of border economic zones (BEZs) on the quality of female labor, and (iv) the role of financial services in trade facilitation. 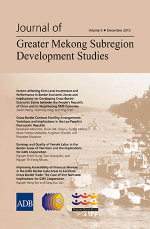