How Mangrove-Friendly Shrimp Farming Is Protecting the Mekong Delta
Articles 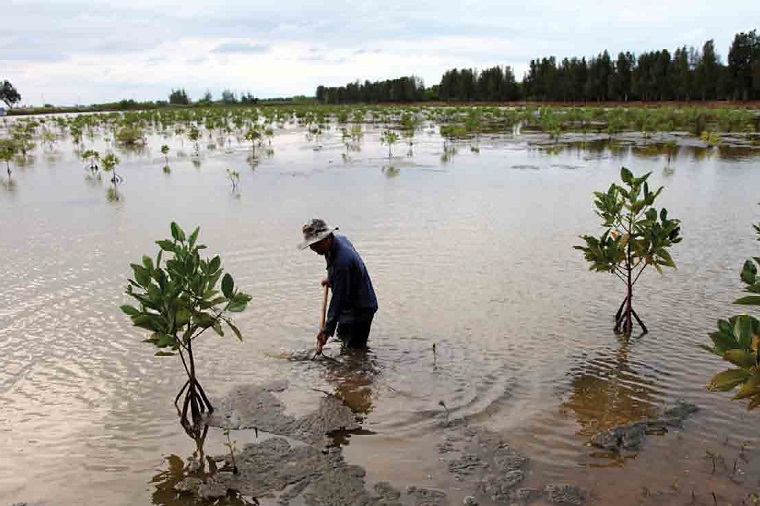 Ca Mau province, Viet Nam’s largest shrimp producer, is pioneering this ecosystem-based approach to climate adaptation in the Greater Mekong Subregion. Farmers who shift to environment-friendly practices and commit to maintain at least 50% mangrove cover in their shrimp farm within 5 years receive help in getting their products internationally certified as organic. In the world market, certified organic aquaculture products sell at a premium, about 20% to 30% more than the regular price.

Mangroves provide a natural barrier against storms and flooding. They also provide habitat and support a wide variety of species, including endangered ones.

In Viet Nam, aquaculture expansion is the leading cause of mangrove loss in recent years, particularly in Ca Mau which accounts for about a quarter of the country’s shrimp production. Citing provincial data, a study by the Asian Development Bank (ADB) notes that about 66,250 hectares of mangroves have been converted to shrimp ponds from 1980 to 1995. Coastal erosion also destroyed some 3,800 hectares of mangroves from 2007 to 2014.

The geographic and socioeconomic features of the Greater Mekong Subregion make it particularly vulnerable to climate change. Low-lying coastal areas with high concentrations of people and infrastructure are at risk of sea level rise. Floods and droughts have increased in frequency and intensity. Extreme floods cost as much as $70 million in damages a year. Droughts cause massive losses to rice yields and reduce livestock and fishery output. In 2016, the Mekong Delta suffered its worst drought in 90 years, which cost Viet Nam more than $200 million.

Countries of the Greater Mekong Subregion have started exploring ecosystem approaches to climate adaptation and mitigation, which integrate management of land, water, and living resources to promote conservation and sustainable use. In the subregion, Viet Nam has led the way by conducting research and implementing pilot projects since the late 1990s.

The ADB study looked at the cost and benefits of certified organic shrimp farming to different stakeholders in Ca Mau and considered these as key factors in developing payments for forest environmental services in aquaculture. Farmers protecting mangroves and providing certified organic shrimp are the payees; global customers, who are willing to pay a higher price for organic shrimp, are the payers; and domestic seafood processors serve as intermediaries between the payers and payees.

Viet Nam adopted payments for forest environmental services as a key policy in 2010 to protect and restore degraded or threatened forests and to provide livelihood opportunities for poor communities in remote areas.

The certified organic shrimp system was started by the Viet Nam Association of Seafood Exporters and Producers in Ca Mau in 2000 with the support of the Swiss Import Promotion Program (SIPPO). The certifying organization was Naturland of Germany. Production must meet European regulations on organic shrimp farming, which involve following sustainability, hygienic, and environmental standards.

Farmers were trained in organic shrimp farming; some received support in sourcing shrimp seed from certified hatcheries and financial aid in renovating their shrimp ponds. They were audited by the Institute of Marketecology of Switzerland to check compliance with standards.

By 2001, 146 farms or nearly 1,000 hectares were certified organic under the program. The pilot yielded positive results because farmers were given economic incentives and management control over the farming area.

The study, which was conducted under the Improving Payment for Forest Ecosystem Service Implementation project, says the sustainability of the certified organic shrimp system in Ca Mau will depend not only on processing companies and farms but also on supporting policies and institutions, promotion and marketing programs, and customers’ needs and willingness to pay a price premium. Among its recommendations is how to put in place a transparent and fair benefit-sharing mechanism, which considers the costs incurred by both the farmers and seafood processing companies and ensures the equitable distribution of the premium.

Climate Change and Rural Communities in the Greater Mekong Subregion: A Framework for Assessing Vulnerability and Adaptation Options