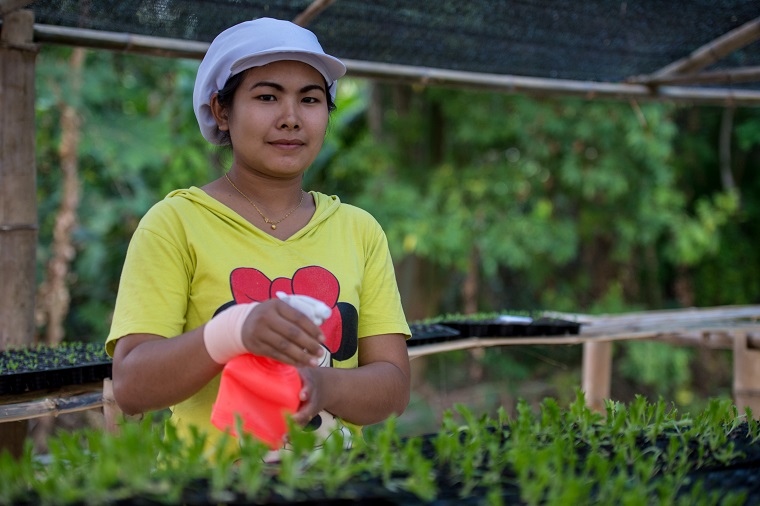 Safe, organic food is becoming popular across the Greater Mekong Subregion. A pilot program in Thailand is helping farmers meet the growing demand and leave chemicals behind.

MAE WANG, THAILAND – To the untrained eye, there’s nothing unusual about this vegetable patch in the mountains of northern Thailand. Except perhaps for the well-dressed young man poking around a row of cabbages.

“These insects flying around are a good sign,” says Amnuay Niyomprainiwet. The wispy weeds are a plus too, as is the soil’s gritty texture. He declares the plot organic.

Until recently, the mainly ethnic tribal villages of Mae Wang district used pesticides and synthetic fertilizers to grow vegetables for sale at markets in nearby Chiang Mai. To make ends meet, farmers pumped chemicals into the soil so they could grow crops more intensively and out of season. The costly additives caused crushing debts. Some villagers got sick from exposure to toxins.

Biggest beneficiary is the environment

Like many young, rural Thais, Amnuay left his village for a city job. He returned after hearing of a different way to farm. Now he is part of a small but growing movement that promotes organically grown produce, not just in Thailand, but in neighboring Cambodia, Lao People’s Democratic Republic (Lao PDR), Myanmar, and Viet Nam. He grows his own organic produce and inspects other smallholder farms to assess whether they can be certified organic, under a new effort to boost farmer incomes by meeting growing demand for healthy food.

“We want to showcase organic farming to show young people that farming is an option for them.” - Amnuay Niyomprainiwet, organic farmer.

But perhaps the biggest beneficiary of organic farming is the environment. Thailand is one of the world’s biggest users of agricultural chemicals. If incorrectly used, fertilizers damage the soil, and when made from nitrogen they can emit nitrous oxide, among the most powerful of greenhouse gases with a heat-trapping ability nearly 300 times greater than carbon dioxide. Most nitrogen emissions come from agricultural fertilizer, which is used excessively and often inefficiently in the Greater Mekong Subregion (GMS)—a grouping that includes Cambodia, Lao PDR, Myanmar, Thailand, Viet Nam, and Yunnan Province and Guangxi Zhuang Autonomous Region in the People’s Republic of China. The GMS accounts for as much as 18% of global nitrous oxide emissions from fertilizer.

While the climate risks are alarming, the health risks posed by agricultural chemicals are also pushing public demand for organic produce. As incomes rise across Mekong countries, so too does demand for food. Many busy office workers in cities like Bangkok don’t have time to cook their own meals using healthy ingredients. But they are aware of the health risks associated with agricultural chemicals, and are showing more interest in buying organic food. “Families in Thailand don’t really cook at home any more, they eat out at restaurants,” says Suwanna Langnamsank, managing director of Lemon Farm, a well-known organic supermarket with stores around Bangkok. “We want to raise awareness even more about eating and cooking well.” Demand for organic food outstrips supply in most of the GMS. The challenge is to convince farmers to make the switch from chemical-fed produce. Many farmers are heavily indebted due to low commodity prices and the high cost of fertilizer and pesticides. They lack the money, knowledge, and training to obtain the third-party certification—usually from private sector providers—needed to label and market a product as officially organic.

So, Thailand’s Ministry of Agriculture and Cooperatives, together with private food and hospitality enterprises such as Lemon Farm have teamed with the Asian Development Bank (ADB) and the Thai Organic Agriculture Foundation to develop a peer-to-peer system for farmers to test and certify each other’s produce. The participatory guarantee system, or PGS, is being piloted at 15 sites around Thailand, five of them funded under a $14 million technical assistance grant to implement the second phase of the ADB-supported GMS Core Agriculture Support Program. The program, which has been underway since 2012, is also supported by the Swedish International Development Cooperation Agency, the Nordic Development Fund, and by financing partners under the Water Financing Partnership Facility. It aims to boost access to markets for climate-friendly agricultural products produced by smallholder farmers across the GMS. Pilot projects in the six GMS countries are demonstrating the impact of farming with zero-chemicals and more efficient use of nitrogen. Training is provided in techniques such as certified composting, biochar, bio-pesticide, crop rotation, low-methane rice farming, sustainable soil management, rainfall harvesting, and water-saving techniques.

“Organic farming is the traditional way of farming. We are coming back to the system our forebears used.” - Kemkaeng Yutitamdamrong, a Deputy Director General at Thailand’s Ministry of Agriculture and Cooperatives.

A key goal is to develop a roadmap for a GMS-wide policy to regulate the use of nitrogen fertilizer, thereby increasing resilience to climate change impacts while helping farmers to earn higher incomes through value-added products.

“Organic farming is the traditional way of farming,” says Kemkaeng Yutitamdamrong, a Deputy Director General at the Land Development Department of Thailand’s Ministry of Agriculture and Cooperatives. “We are coming back to the system our forebears used. We want to strengthen the capacity of farmers to produce organic goods and link to markets.

The end goal is to link farmers to the global market.” But the first step in that journey, getting certified, isn’t easy. Over the course of a year, peer inspectors like Amnuay steer farmers through an eight-stage program, based on the standards of the International Federation of Organic Agriculture Movements.

Nearly 500 households are participating in Thailand’s pilot. Inspectors visit each applicant’s land to see what needs to be improved to certify it as organic. “If there’s a farmer upstream using chemicals we’ll recommend our farmer dig a small canal to drain the water,” says Amnuay. “We also observe the color of the crops to see if they’re too green.”

Problems are reported to an oversight committee that decides whether to certify. If certification is declined, the farmer gets a second chance, and the committee tries to help fix any issues. It’s a collaborative effort aimed at convincing farmers to stay on the land rather than sell up and move to cities, and might even persuade young people to return to farming. “People would love to come back here but don’t know if they can make a living,” says Amnuay. “We want to showcase organic farming to show young people that farming is an option for them.”

“People are willing to pay for safe food”

At Mae Wang, organics account for only about 20% of incomes among families participating in the pilot. Wholesalers don’t pay much more for organic crops after subtracting travel costs to the hillside communities, so many farmers supplement their incomes by taking jobs in Chiang Mai.

Recent droughts in northern Thailand have made farm life even more precarious. But this hasn’t dampened enthusiasm for the organic lifestyle. Pimwalan Pinthuprapha was a graphic designer in Bangkok before rejecting city life to grow organic produce for her hotel near Chiang Mai.

On Sundays, she is usually at Jing Jai Market, which has partnered with the project to link PGS farmers to markets. It also advises them on how to process crops into products like the kaffir lime soap and rice bran odor-eaters that Pimwalan sells at her stall. “I was already 50 when I made the switch to an organic life,” she says. “We have a farm where I grow rice and fruit to sell at our hotel, and we can process crops into products to sell here at the market.”

Thailand’s early embrace of organic products makes it a potential hub for a region-wide market. “People are willing to pay for safe food nowadays,” says Supara Sekajarn, Director of Trade Promotion at Chiang Mai’s Office of Commercial Affairs. “There’s a growing middle class in Cambodia, Myanmar, and Lao PDR that can now afford these products. That’s the market we want to access.”

Agriculture in the Greater Mekong Subregion