Economic corridors are areas, usually along major roadways, that host a variety of economic and social activities. This includes factories, tourism, trade, environmental protection activities and other aspects of the economy and social development of an area.

An economic corridor is much more complex than a mere road connecting two cities. It involves not only the development of infrastructure but also the crafting of laws and regulations that make it easier to do business, access markets, and conduct other activities that support trade and development in a comprehensive manner. 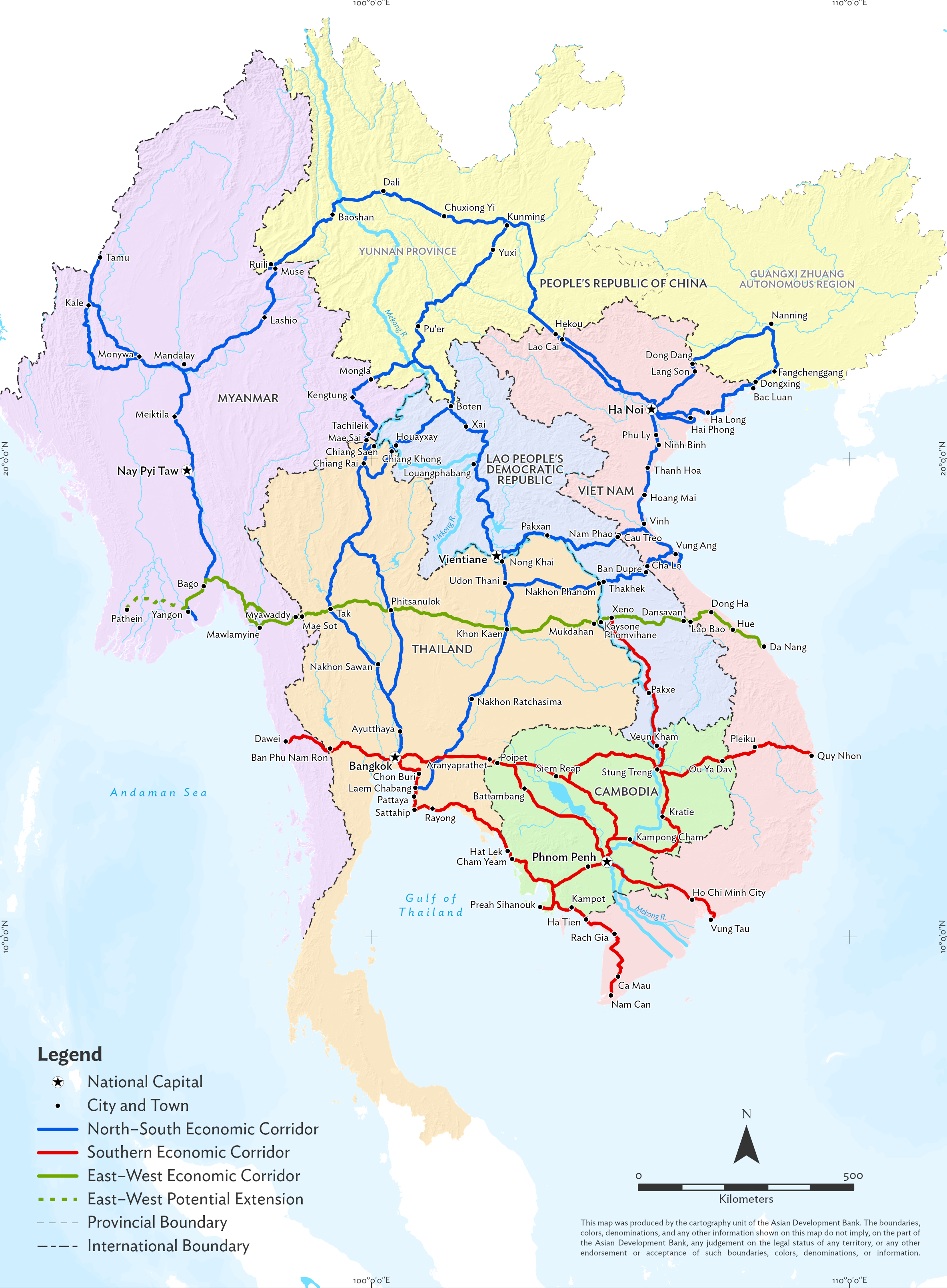 Economic corridors bring a wide range of benefits, far beyond what any single project can deliver. There are three main economic corridors in the Greater Mekong Subregion. Plans are underway to expand these corridors, and strengthen links between GMS nations’ capital cities.

More than 1,200 years ago, during the Tang Dynasty, merchants in Yunnan, People's Republic of China, began forging trade routes to carry the region’s aromatic tea and other goods to the far corners of Asia. One of these southern caravan trails cut through what is today Luang Namtha Province in the Lao People’s Democratic Republic (Lao PDR), and across the Mekong River into Thailand.

Today these routes are being revitalized. Route 3 Highway in Lao PDR, stretching from Boten at its northern border with the PRC to Houayxay in the south, is at the heart of this transformation. The new road was the last remaining link in the Greater Mekong Subregion’s (GMS) North-South Economic Corridor extending from Kunming, PRC through northwest Lao PDR and down to Bangkok.

The corridor plays a critical role in providing Yunnan Province and northern Lao PDR access to important sea ports. This opens access to important markets, given the existing road network from Singapore via Malaysia to Chiang Rai, and from Kunming to Beijing.
The North-South Economic Corridor involves three routes along the north to south axis of the GMS geography:

GMS Ministers have endorsed the following extensions and/or realignment for this corridor based on a study by the Asian Development Bank .

Not long ago, transporting goods through the Lao People's Democratic Republic to Viet Nam was a long slog over cracked asphalt. Trucks formed a bumper-to-bumper caravan, dodging potholes all the way. Hard rains would turn parts of the route into a muddy creek.

Today, the trip is a few hours and traders are making the most of it. This once-rugged path is now a key passageway along the ADB-supported East-West Corridor, which runs from Da Nang Port in Viet Nam, through Lao PDR, Thailand, and to the Mawlamyine Port in Myanmar. It extends 1,320 kilometers, intersecting the North-South Economic Corridor at the provinces of Tak and Phitsanulok in Thailand.

GMS Ministers have endorsed the recommendation of an Asian Development Bank study to extend the western end of EWEC to Yangon–Thilawa in Myanmar, using the Myawaddy–Kawkareik–Eindu–Hpa-An–Thaton–Kyaikto–Payagi–Bago–Yangon–Thilawa route, with a possible extension to Pathein.

It covers the development of the following subcorridors: