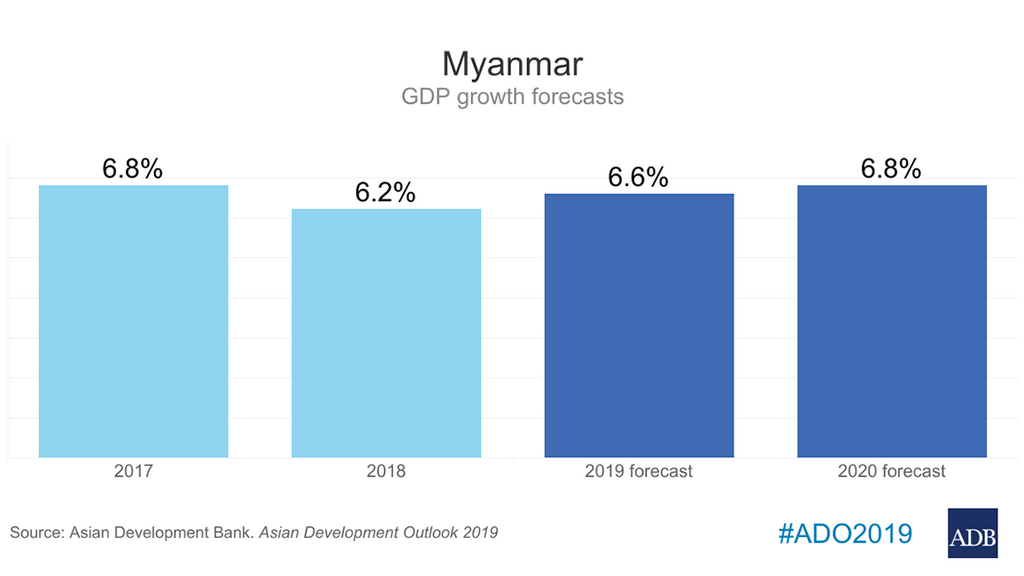 YANGON, MYANMAR (3 April 2019) — Myanmar’s economic growth is expected to pick up in 2019 and 2020, thanks to higher foreign direct investment (FDI) and positive responses to the government’s economic and policy reforms, according to a new report by the Asian Development Bank (ADB).

“Prospects for Myanmar’s economic growth for 2019 and 2020 looks positive as the country opens up the retail and wholesale sectors and continues to modernize corporate governance and management in Myanmar,” said ADB Country Director for Myanmar Mr. Newin Sinsiri. “Myanmar will continue to see steady growth in the next few years if the government successfully accelerates the wide range of economic reforms initiated since 2011.”

The government’s efforts to standardize FDI application and implementation procedures will lead to an increase in foreign investment in Myanmar. The number of FDI approvals reached about $1.5 billion between October 2018 and January 2019, compared with $823 million over the same period the year before. The increase was largely because of higher commitments in the country’s manufacturing and services sectors from Singapore and other Asian investors.

Growth in services is expected to rise to 9.0% in the fiscal year ending in September 2019, thanks to growth in telecommunications and tourism-related subsectors. Meanwhile, growth in agriculture, which accounts for a quarter of Myanmar’s GDP, will slow to 0.5% during the same time period, down from the 2.0% growth recorded during April–September 2018, mainly because of the effects of the 2018 floods.

The report says Myanmar’s inflation is expected to decline slightly to 6.8% in the fiscal year ending in September 2019. But inflation will pick up to 7.5% the year after, as Myanmar’s economic growth gains momentum, despite the weakening international oil prices. Fiscal and monetary policies, meanwhile, are expected to remain supportive of growth while maintaining Myanmar’s macroeconomic stability.

Risks to Myanmar’s growth outlook remain. For example, the withdrawal of the Generalized System of Preference for Myanmar’s exports from the European Union, where Myanmar sends 10% of its exports, would negatively impact the economic prospect, according to ADO 2019. Other headwinds include domestic conflicts and the slow progress in implementing economic reforms, which include public financial management, strengthening treasury functions, improving accounting and auditing standards, as well as enhancing the legal and regulatory framework.

ADB is committed to achieving a prosperous, inclusive, resilient, and sustainable Asia and the Pacific, while sustaining its efforts to eradicate extreme poverty. In 2018, it made commitments of new loans and grants amounting to $21.6 billion. Established in 1966, it is owned by 68 members—49 from the region.