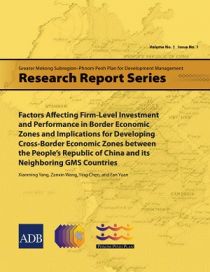 The establishment of cross-border economic zones (CBEZs) in the border areas of the People's Republic of China (PRC) and its neighboring countries in the Greater Mekong Subregion (GMS) has recently emerged as a strategy for further promoting trade and investments in the subregion. Unlike a border economic zone (BEZ), which is confined within the national territory, a CBEZ is an economic zone traversing a transnational area and requiring a unified set of policies and incentives in such areas as finance, taxation, investment, trade, and customs regulation. While no CBEZ currently exists in the GMS, the establishment of this type of zone has recently been initiated for Hekou-Lao Cai along the North-South Economic Corridor border involving Yunnan Province in the PRC, and Lao Cai Province in Viet Nam. The design of incentive packages to be implemented in the CBEZ is thus a major challenge for policy makers.

To help inform the design of incentive policies in CBEZs, this research studied BEZs in selected border areas in Yunnan Province, and in Lao Cai Province, with the objective of assessing (i) the factors that attract investments to the zones, and (ii) the effects of investment incentive policies on the performance of firms locating in these zones. Using three types of investment motives (marketseeking, resource-seeking, and efficiency-seeking) as dependent variables, and applying parametric and nonparametric analysis, the study identified significant variables that affect the firms' locational decisions and investment performance. The implications of these variables on the design of incentive policies were subsequently analyzed.

This research report was made under the Greater Mekong Subregion-Phnom Penh Plan for Development Management.

The Phnom Penh Plan for Development Management: A Retrospective

More on Health and HRD