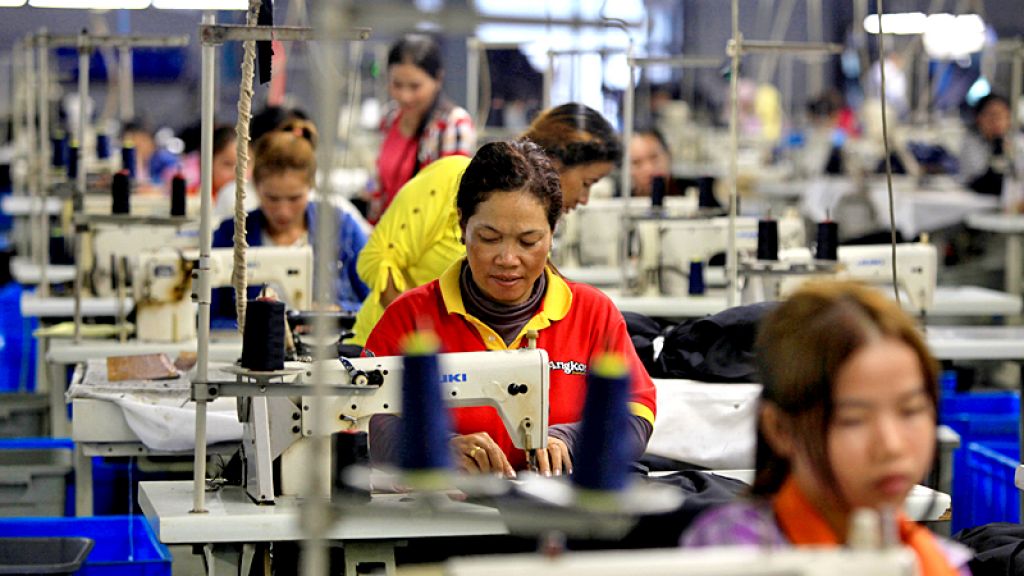 La Sopheap knew poverty throughout her life, but when her husband passed away shortly after the birth of their fourth child, she found herself struggling like never before to make ends meet.

“I didn’t even have enough money to feed my children every day,” she recalls.

The opening of a special economic zone (SEZ) near her home in Kampot province brought 40 businesses and 10,000 much-needed jobs to Sopheap’s impoverished community. Her work as a seamstress is providing her family with the economic security and stability they long yearned for.

“Now I can feed my children and take care of their needs, and these days there are better roads and better electricity, even in the community where I live, so my life is much better than before.”

Kampot province on Cambodia’s southeastern coast had struggled to attract international investment. The main deterrents were poor roads and a lack of reliable electricity, major obstacles for international businesses looking to set up operations.

Two projects supported by the Asian Development Bank (ADB) helped changed the equation in Kampot, providing reliable, affordable energy to businesses and to tens of thousands of poor rural households who had never enjoyed electricity in their homes. The Greater Mekong Subregion (GMS) Transmission Project supported the Electricity Authority of Cambodia (EDC) in constructing a massive 109 kilometer transmission line carrying electricity from the Viet Nam border to major substations in Cambodia. Three years later a second transmission project, which included an 82 km line from Kampot to Sihanoukville, expanded the national electricity grid to this part of southern Cambodia.

“It was reliable energy supply that made the development of this special economic zone possible,” says Shao Jian Ming, Deputy Director of the Bat Trang Special Economic Zone where Sopheap works. “The energy we’re getting from EDC is roughly 50% cheaper that power from diesel generators, so now we can attract business and create jobs.”

Sihanoukville, Cambodia’s 4th largest city and home to the country’s only deep sea port, has particularly benefitted from this ADB support. Before these projects the city got its power from a small, isolated station that could only provide electricity for about 8,000 consumers - at a rate that was among the most expensive in the world. Now that the city can offer affordable, reliable energy supply, more businesses are moving in, and thousands of jobs are being created.

“Before, when we didn’t have electricity, we made a living baking bread in a wood stove, which we’d sell in our village,” says Mao. “When we got electricity and better roads, we saw new opportunities, and thought we could go into a new business.”

Today Mao’s business sells a wide array of goods - from fertilizer, groceries and rice, to cement and concrete pylons. He’s been able to quickly grow his business, earning enough money to move his family out of the small thatched hut they used to call home, and into a spacious, two-story concrete home. His thriving business is housed in a separate building.

“Before, the dark meant the end of the day. Now we can keep doing business, keep producing, after the sun goes down,” he says.

Cross-border energy trade between Viet Nam and Cambodia has expanded energy access, brought electricity prices down, and helped business create more jobs. It is this type of cooperation that lies at the heart of the Greater Mekong Subregion’s work to foster economic cooperation for the benefit of all the region’s people.

In Cambodia, Improved Access to Affordable Electricity Helps Save Lives

Energy in the Greater Mekong Subregion