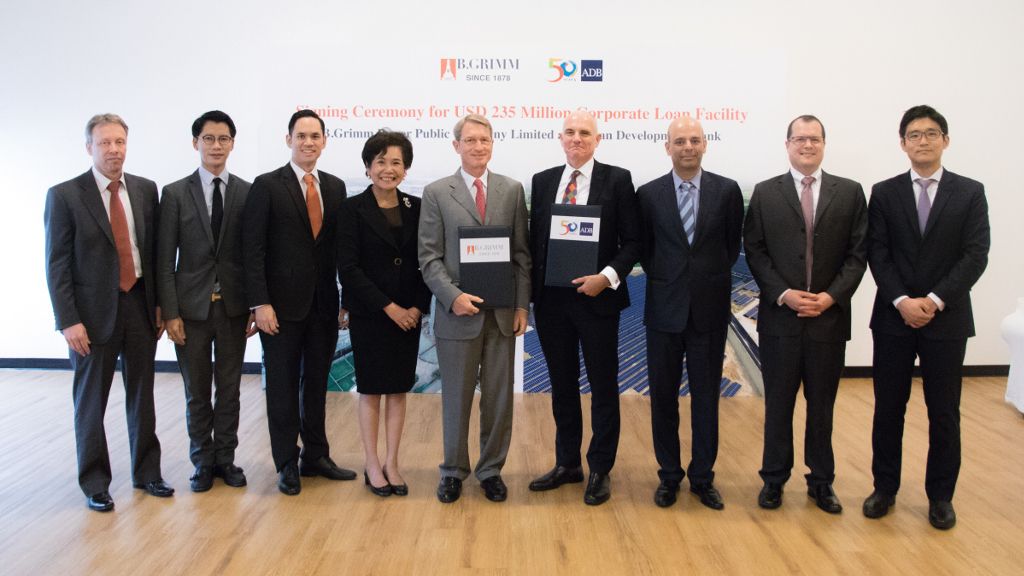 BANGKOK, THAILAND (23 February 2018) — The Asian Development Bank (ADB) today signed a loan equivalent of up to $235 million with B.Grimm Power Public Company Limited (B.Grimm Power), one of the largest power producers in Thailand, to develop and enhance renewable energy capacity in member countries of the Association of Southeast Asian Nations (ASEAN).

“The development of renewable energy in Southeast Asia is critical to meet its energy needs and B.Grimm Power is at the forefront of the region’s fast growing alternative energy sector,” said Michael Barrow, Director General of ADB’s Private Sector Operation’s Department. “ADB is proud to once again partner with B.Grimm Power as it continues its expansion strategy in ASEAN member countries.”

B.Grimm Power’s total distributed power generation capacity is expected to increase by over 50% to 2,500 megawatts (MW) by 2022, while the renewable energy share in its portfolio will rise from 10% to 30%.

ADB took a B1,968 million ($57.7 million) equity stake in B.Grimm Power as part of the company’s initial public offering in July 2017. ADB also administers a $20 million loan provided by the Canadian Climate Fund for the Private Sector in Asia under the Clean Energy Financing Partnership Facility.

B.Grimm Power is a subsidiary of the 140-year old conglomerate B.Grimm Group, operating in the energy industry since 1993 in Thailand. B.Grimm Power currently has a total capacity of 1,779 MW, operating 13 gas-fired plants, with 4 more under development or construction. In recent years, B.Grimm has diversified into renewable energy and is operating 15 solar power plants and 2 hydro power plants.

ADB, based in Manila, is dedicated to reducing poverty in Asia and the Pacific through inclusive economic growth, environmentally sustainable growth, and regional integration. Established in 1966, it is owned by 67 members—48 from the region.

Renewable Energy in the Greater Mekong Subregion: A Status Report