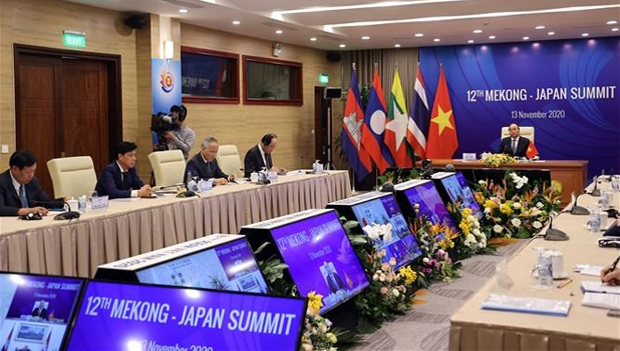 Leaders of Mekong countries expressed their appreciation for Japan’s determination to maintain cross-border travel and its support toward addressing the negative impact of COVID-19 in the subregion. They highlighted the high-level visits by Prime Minister Suga to Viet Nam in October and Foreign Minister Toshimitsu Motegi to the Mekong region in August.

The meeting reaffirmed (i) the importance of further enhancing hard/ soft/ and industry connectivity, (ii) close collaboration toward the realization of smart cities as guided by the framework of ASEAN Smart Cities Network, and (iii) furthering trade and investment relations.

Countries welcomed the steady progress of key infrastructure projects to boost connectivity in the Mekong region, including the construction of the new Bago-Kyaikto Highway Section in the East-West Economic Corridor.

They also acknowledged the initiative to encourage power trade and integration in the subregion through the launch of the Japan-US Mekong Power Partnership.  Japan is implementing several energy initiatives in the subregion, such as a project in Thailand to facilitate cross-border electricity flows and power exchanges, a project in Myanmar to increase transmission capacity and improve system reliability, a project in Phnom Penh, Cambodia, to expand transmission lines and build substations, and a project in the Lao People’s Democratic Republic (PDR) to assist the sustainable development of the power sector through a series of technical cooperation.

Mekong leaders recognized Japan’s notable contribution in Customs capacity building in the subregion through trade facilitation-related trainings for customs officers. They also remarked on the growing importance of e-commerce in world trade under the COVID-19 pandemic, and called for Japan's support in their e-commerce commitments to enable them to fully utilize the benefits of bilateral and regional trade agreements.